South Korea became the 19th country to ratify the UN Port State Measures Agreement (PSMA) on 14 January 2016. The spree of recent ratifications is seen as a stride in the right direction. If the present pace continues the treaty might come into effect by the first week of June.

The UN Port State Measures to Prevent, Deter and Eliminate Illegal, Unreported and Unregulated Fishing was approved by the FAO Conference at its Thirty-sixth Session (Rome, 18-23 November 2009) under paragraph 1 of Article XIV of the FAO Constitution, through Resolution No 12/2009 dated 22 November 2009.

Countries that have ratified the PSMA

Countries with big import markets such as Japan, Taiwan and China should also become a party to bring meaningful change and improve traceability. 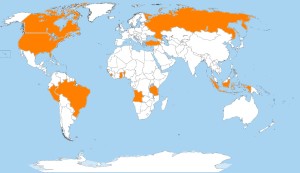 Countries that have signed the PSMA but not ratified it yet

Canada, France, Russia, Indonesia, Ghana, Peru and Brazil should expedite the ratification process so that the PSMA will come into effect as soon as possible.